Almost every kitchen has a pantry, no matter what size the kitchen is. It’s what you use to store many of the foods that you use on a regular basis. In fact, like many of us, you probably take your pantry for granted. However, the origin of the pantry is actually quite interesting.

The space used for food storage (the “pantry” as we know it today) was first used during Medieval times in England as a place to store meat, beer and other provisions. In the 17th and 18th centuries, colonialists in New England used small rooms off of the kitchen for food storage, known as the buttery. It wasn’t until the 1800s that the term pantry came about, which was derived from the Latin word, “panis”, meaning bread. It was during this time that the pantry became a space located between the kitchen and dining room that stored china and silver.

During the 1920s and 1930s the pantry was merged into the kitchen itself. However, during the advent of the refrigerator in the 1950s, the use of pantries dwindled. In the 1960s pantries made their appearance as floor to ceiling cabinets, which is what many of us recognize pantries to be now. Surprisingly enough, the use of the pantry is becoming more important in American homes these days. In fact, they’re beginning to go back to the pantries of yesteryear, with many pantries taking up space adjacent to the kitchen in the form of walk-in pantries. This allows for better use of space, storage and accessibility. 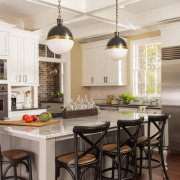 So You Want to Remodel Your Atlanta Home, But No Idea Where to Start? Let us help! 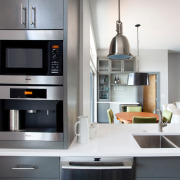 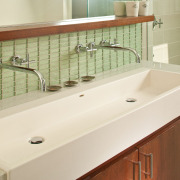 Easing the Stress of Home Renovation

Kitchen Remodeling Trends to Spice Up Your Atlanta Kitchen

Opting for a Peninsula Instead of a Traditional Kitchen Island

A Touch of Style in the Kitchen: Beadboard Details

The Infamous L-Shaped Kitchen Layout You've Got the (Georgia) Power!
Scroll to top